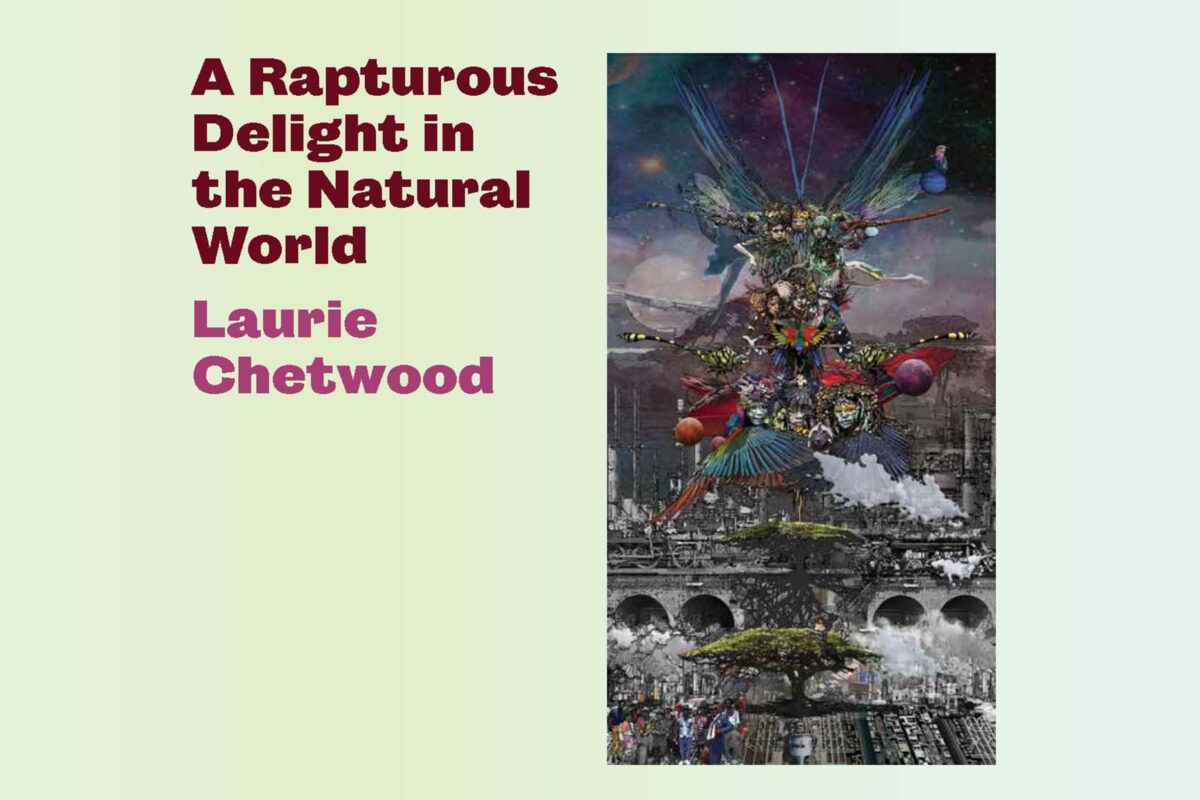 ‘I have been interested in nature and in ensuring that habitat and wildlife species are protected. Natural history and flora and fauna have been special subjects for me, hence my involvement in a number of projects based round a more organic approach to design.’ Laurie Chetwood, 2021

There is a delicate Art Nouveau resonance to the drawings and architecture of London architect Laurie Chetwood. He and his architectural practice, Chetwoods, take inspiration from the beautiful unruliness of nature’s growth and forms whilst combining it with contemporary green technology and upcycled materials plus a concern for ecological resilience, to create arresting and original propositions for buildings and landscapes.

In the period between the 1880s and the outbreak of the First World War, the Art Nouveau movement developed from preoccupations encouraged by a variety of biological and ornamental studies published at the time, such as German biologist Ernst Heinrich Haeckel (1834–1919) in Kunstformen der Natur (Art Forms in Nature, 1899), and a few decades before, such as The Grammar of Ornament (1856) by British architect and theorist Owen Jones (1809–1874). Art Nouveau was seen as a way architects, artists and craftspeople could escape the rather constrained formal aspects of previous traditional and established styles. It seems also to be germane for Chetwood, more than a hundred years later – albeit combined with many 21st-century aims and objectives.

The Gestation of the Architect

Chetwood attended the Brighton School of Architecture from 1975 to 1982. His education was sponsored by an international building contractor, which enabled him to experience all parts of the design and construction process – not the most glamorous route into architecture, but it did give him an insight into what lay ahead, particularly when building designs go to site. He set up his own business in 1988 in the depths of a severe economic recession but was fortunate to have a couple of blue-chip clients who managed to ensure that the fledgling practice survived those early years.

During this time the awareness among the architectural profession of imminent climate catastrophe was less pronounced and had little impact on practice. However for Chetwood, by the mid-1990s his original inclination towards natural history combined well with the ‘green lobby’, which was starting to gain ground, in bringing the environmental agenda into architectural design.

‘Apart from being a great idea in itself, I’ve always found having to consider environmental factors to some extent makes designing more challenging but in a positive way. It’s always easier to design for a more complex or technical brief which brings out the best in you as a designer,’ Chetwood remarks.

Chetwoods, as a practice, became noticeable on the architectural horizon with the building of its multi-award-winning eco-millennium Sainsbury store on the Greenwich peninsula in southeast London (1999). The design was generated from first principles: everything was rethought and standard ways of doing things were re-evaluated. For example, the entrance lobby floor was constructed from recycled aircraft and car tyres and the toilet wall panelling made of melted recycled plastic bottles. At the time the building had the highest environmental credentials as the greenest supermarket building in the world. This reinvention of the supermarket retail typology won many plaudits and awards including shortlisting for the RIBA Stirling Prize; selection by the Design Council as a Millennium Product; the RIBA Journal Sustainability Award; the Design Museum’s Design Sense Award; Retail Week Store Design of the Year 2000; and Channel 4 Building of the Year: People’s Choice 2000. 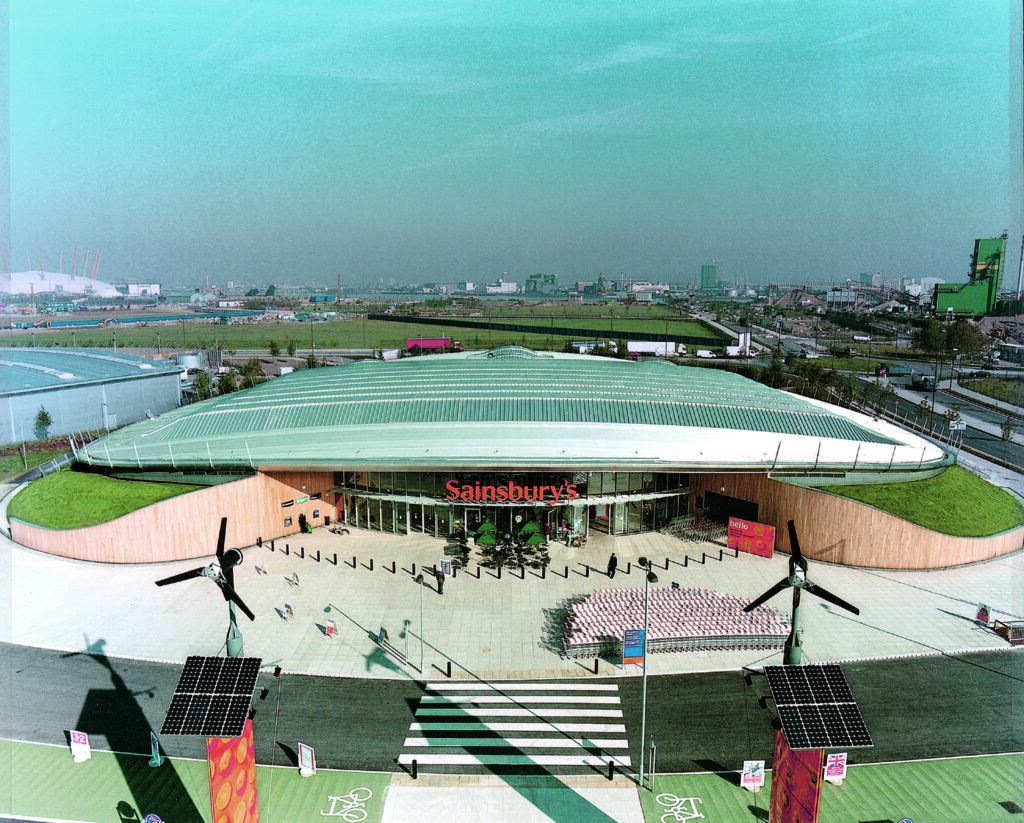 Chetwood describes his creative process and how he makes his drawings thus: ‘I start with traditional sketching, usually in notebooks, allowing a very loose, free-flowing, relaxed process. I need to be comfortable myself in practical terms mentally and physically with the right conditions, meaning I don’t get the designer’s version of “writer’s block” but can just let it flow.’ But his preference for the hand drawings is of paramount importance. ‘Then I usually scan these ideas into some form of 3D software before printing and sketching over the top, and then on into Photoshop where I draw on a tablet. Whilst the tablet is more flexible and generally quicker there is, nevertheless, an element of the technology can become something of an impediment. There is no substitute for sketching with a 2B pencil on paper.’ 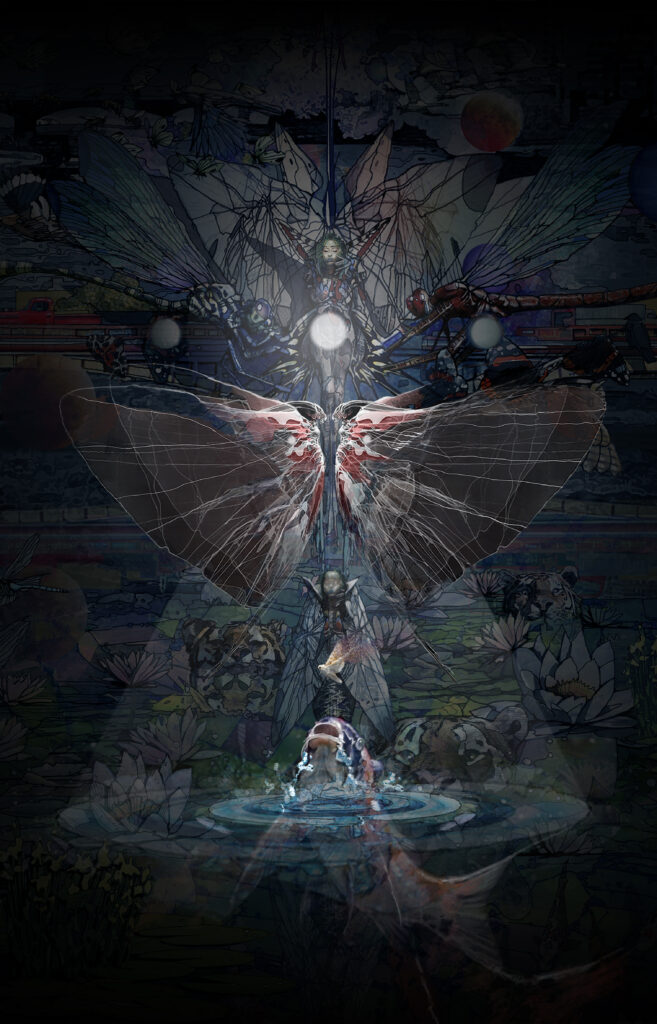 One is reminded of Rolls-Royce’s radiator-mounted mascot ‘The Spirit of Ecstasy’, consisting of a woman, flying or about to fly, her arms behind her and her diaphanous sleeves appearing like wings. She adds a hint of feminine charm to the cars. Chetwood’s figures add a similar slight frisson of sexiness to the work. There is also a strand of the work that evokes nuances of biological organs, dragonfly wings, fungal mycelium, pollen grains and lily pads. 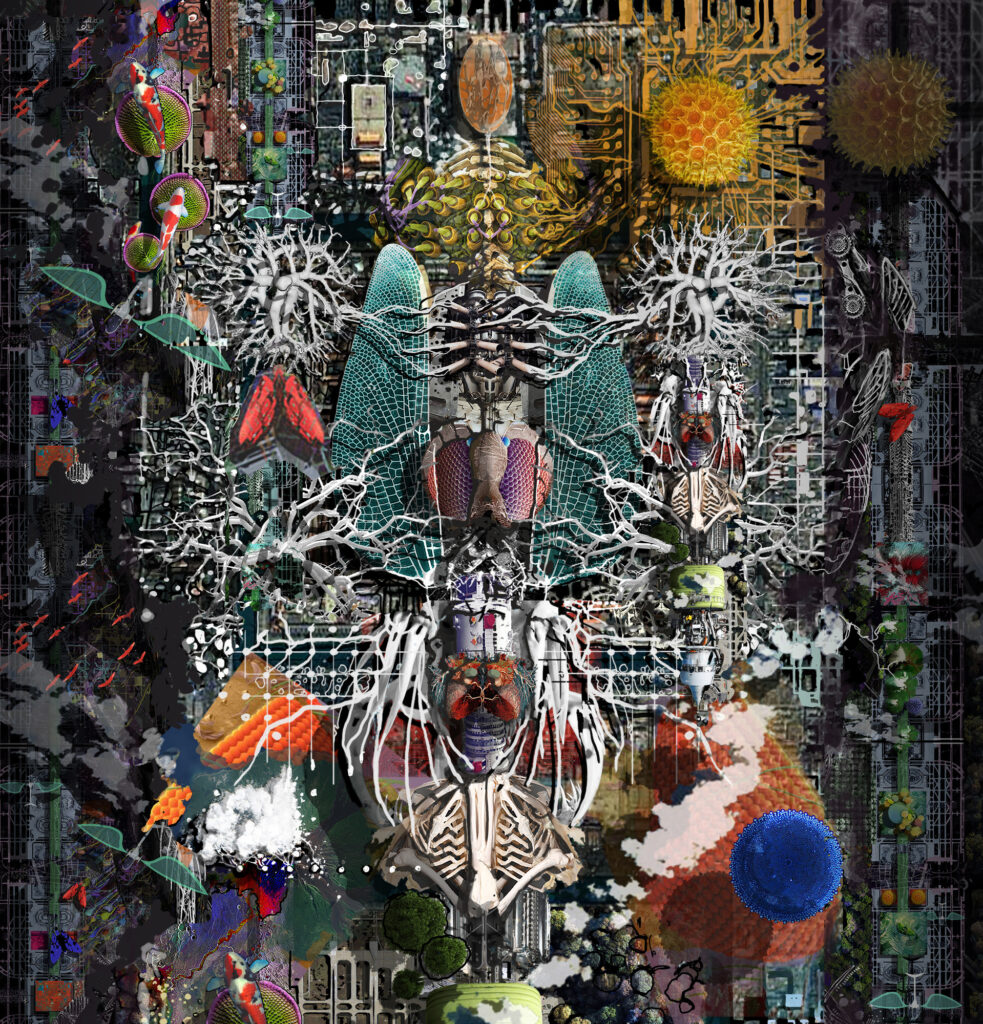 This symbiotic relationship between body, building and landscape is much more than purely an ocularcentric architecture – it involves all five senses to evoke a sixth. ‘I have long believed that if you can design so you get the five senses right, you will get a sixth sense that engenders a sense of wellbeing among the people we are creating these buildings for. In the Practice we are in the process of developing systems to measure and quantify this human response to the experience of architectural spaces and environments. We would then like to take this knowledge on to inform our approach to future projects.’

Laurie Chetwood and Chetwoods also have a substantial history of imaginative and innovative garden designs and have been awarded prestigious prizes for them.

Asked how the firm became involved in London’s renowned Chelsea Flower Show, Chetwood replies: ‘In 2007 we funded our own installation “Urban Oasis” to advertise the five senses while showcasing then relatively new green technologies such as using PV (photo-voltaic) panels to power the opening and closing of the flower form, and a hydrogen fuel cell at its heart. This went on tour around the UK and into Europe visiting the Labour Party Conference in Manchester among other venues. Urban Oasis was seen on its UK tour by the curator of the RHS Chelsea Flower Show. We were asked to design a show garden, it was a great opportunity to put something out quickly with some good publicity. The Urban Oasis garden at Chelsea – which we financed ourselves – explored environmental technology that used PV and wind turbine power to irrigate the garden. It was the start of three consecutive gold medal winning gardens.’ 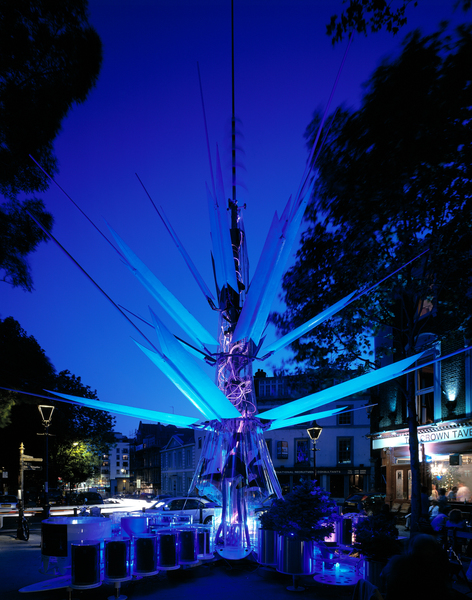 As we turn our thoughts to our contemporary condition and context it is clear we are at a medical, viral, economic, social and political crossroads. Holistic thinking needs to be done and architects can be at the forefront of this green revolution. Simple things like insulating and double-glazing all our housing stock, and making our roofs white to reflect the sun’s rays, can be done. However, larger structural and strategic change is also needed, like not continuing to fund fossil fuel power and investing in green environmental research – discovering new methods of operating that are mutually beneficial for humanity and for the environment.

It is clear to Chetwood that these epistemological changes need to be made, and now. ‘Our current systems are not working for our planet or its inhabitants. The pandemic has tested us and shown our fragility. We now have the perfect opportunity to come back with an improved outlook. An outlook that respects our communities, our valuable natural assets and our collective health.’ The political will needs to be constantly stated and acted upon not to let the divisive forces of capitalism and consumerism maintain and exacerbate the huge divide between the wealthy and the poor.

The reconciliation of differences between the Global North and the Global South, as well as developing the dignity of green employment for vast numbers of the earth’s population and thus creating virtuous cyclic economies, must be worldwide imperatives. Chetwood agrees: ‘I think the Green New Deal needs to look something like Kate Raworth’s Doughnut Economics model. We need to live within our planetary boundaries whilst allowing for a good social foundation, not leaving anyone behind. We need to get a move on though.’ Raworth’s Doughnut advocates an economic imperative that operates within planetary boundaries of what the world can sustain functioning under its ecological ceilings. An economy is considered ‘healthy’ when each of the 12 social foundations are met; these include access to healthcare, education and social equity without ‘overshooting’ the nine ecological ceilings that include climate change, biodiversity loss and chemical pollution. The depiction of this virtuous cyclic economy as a diagram takes the form of a doughnut.

Chetwood and his firm continue to explore the biophilic possibilities and inspirations that ‘ground’ humanity and give us the sense of wonder and wellbeing that some believe is due to our genetic makeup conditioned by thousands of years of living in agrarian contexts with much closer connections to the earth and its natural rhythms. For whatever the actual reasons are, it is clear that working in this way combined with Chetwood’s drawing skills creates individually audacious and environmentally kind buildings that are original and joyous. 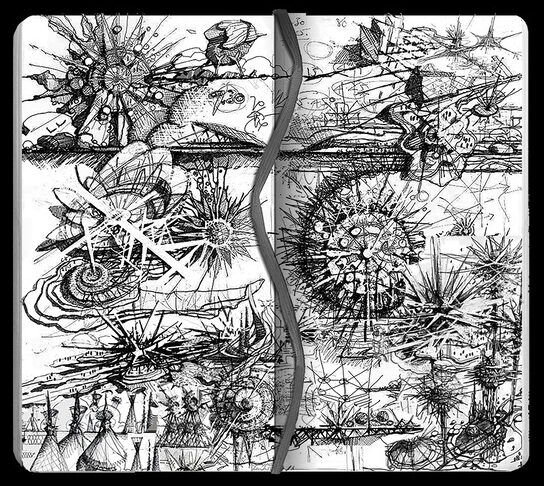