Laurie Chetwood has been working on architectural, landscape, garden design and cultural projects in China for nearly 10 years.

“During this time I have developed a great respect for – and increasing understanding of – Chinese history and culture.  This has inspired many of the architectural and landscape designs that I have developed.

It has also been a great honour to be asked to contribute ideas to the pan-China movement towards social, economic and environmental sustainability in new design typologies.”

These are some highlights of my work with Chinese clients:

Phoenix Towers  for HuaYan Group in Wuhan, the City of a Hundred Lakes, was designed to be the world’s tallest pair of towers, a landmark within the city’s ambitious environmental masterplan that would showcase social, economic and environmental sustainability in China, providing an entertaining and instructive experience for local people and visitors.  At the time Wuhan had recently been designated an environmental ‘super city’ by the Regional and Central Governments. 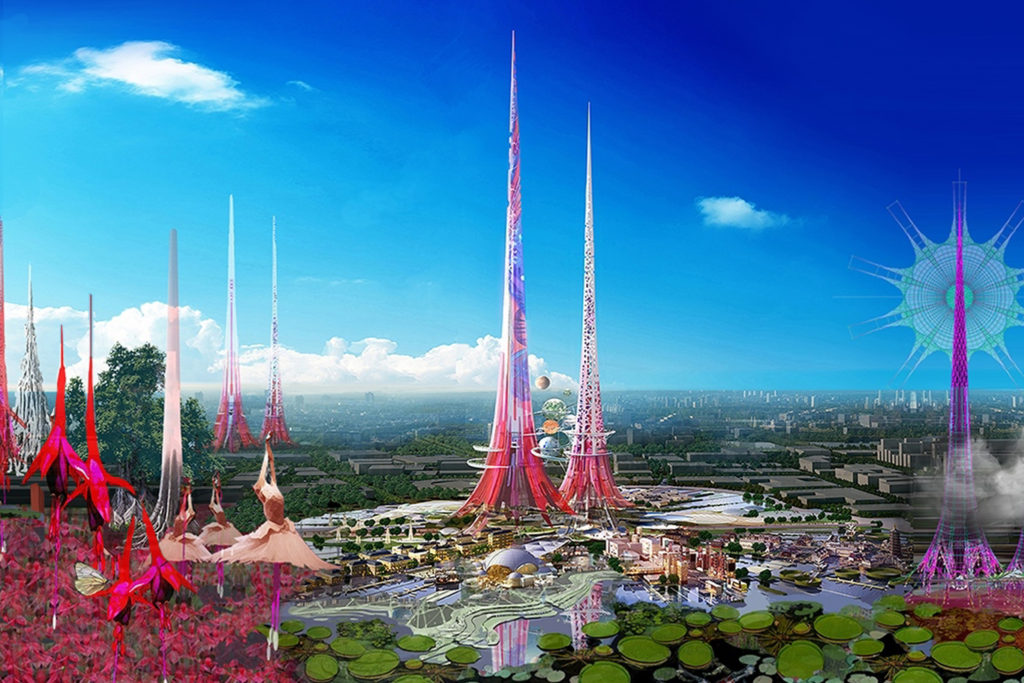 In response to the client’s wish to develop a new style of architecture that would emphasise Chinese identity, the use of a pair of towers reflects the dualist elements of Chinese culture in contrast to a more western monolithic form.  Based on the traditional Chinese Phoenix symbol of two birds, male Feng and female Huang, the plan was generated from the Yin/Yang form to represent perfectly balanced union.  The Feng tower uses cutting-edge technology to ‘feed’ the Huang tower with renewable power in a symbiotic process.

This project received global media attention and the sustainability diagram was selected for exhibition at the Royal Academy of Arts Summer Exhibition.

I was the first architect to be awarded Gold Medals for garden design at the Royal Horticultural Society Chelsea Flower Show in London.  I have designed five medal winning show gardens for this exhibition and have enjoyed incorporating art and architecture elements into their landscape and planting design.

The two China-inspired gardens I have designed reflected the influence of Chinese historic and contemporary culture in their design, colour palettes, layout, architectural and artistic forms and planting.

The Chengdu Silk Road Garden was the first Chinese-themed show garden I created for  the Chelsea Flower Show.  It was inspired by the rich history and culture of Chengdu, capital of the ancient Shu kingdom, which since ancient times has been known as the ‘Abundant Land’ and ‘Nature’s Storehouse’ thanks to its fertile soil and favourable climate. 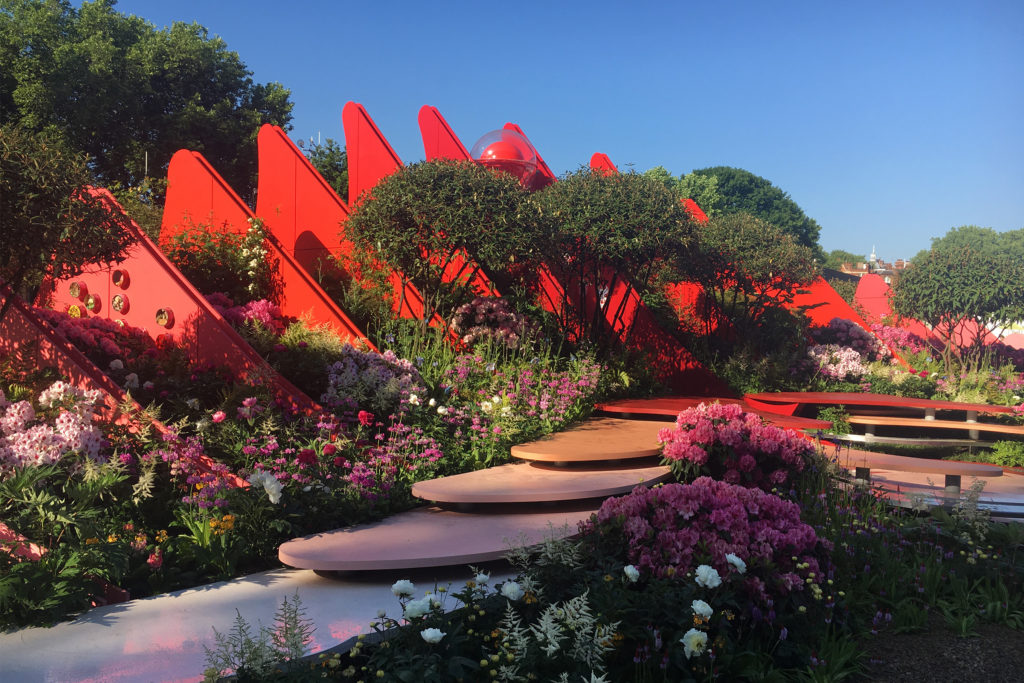 The form of the garden combined architectural and planting design in a conceptual depiction of the different landscape features of Chengdu and the mountains, plains, rivers and lowlands of surrounding Sichuan Province.

The red central spine of mountains paid tribute to the important positive symbolism of this colour in China.

The garden also included water elements in tribute to Chengdu’s Dujiangyan Irrigation System which is the oldest and only surviving no-dam irrigation system in the world, designed to automatically control the water flow of the rivers from the mountains to the plains throughout the year. Since the 3rd Century BC this ‘Treasure of Sichuan’ has played a crucial role in providing protection from flooding while irrigating farms and providing water resources for more than 50 cities in the province.

The planting design reflected these varied planting environments and landscapes to showcase some of the many garden plants familiar in the West that have Chinese origins.

A ‘Silk Road’ path ran the length of the garden, celebrating the commercial, cultural and horticultural legacy of the historic 4,000 mile long East/West Silk Road trade route across Asia, Africa and Europe.

At the heart of the Silk Road Garden the circular symbol of the ancient Chengdu legend of the Sun and Immortal Birds lay on a central theatrical plaza, and was also represented in a glowing sun suspended above the garden. The symbol was based on a 3,000 year old gold artefact recording this legend that was discovered among the Jinsha ruins in Chengdu.

In 2018 I designed the Wuhan Water Garden to represent a journey through the contrasting natural landscape of China’s Hubei Province and the high-tech urban environment of the City of Wuhan. 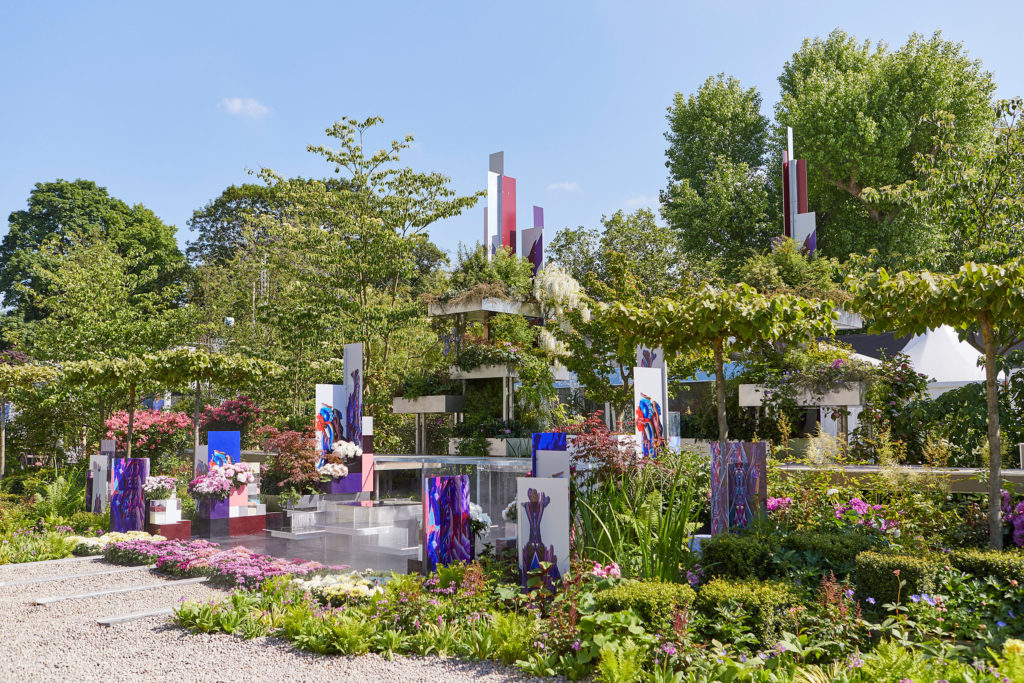 This Garden was inspired by the historic ability of Wuhan – China’s ‘City of 100 Lakes’ – to manage and control the flood waters of the iconic Yangtze River using man-made canals and lakes that ebb and flow according to the level of water in the river.

The planting design reflected contrasting rural and urban landscapes. It was a celebration of Chinese flora particularly the flora of Hubei Province. It included about 75 different species and 5,500 plants.

A stylised ‘forest’ landscape surrounded the central lake and ‘city’ to represent the forests that once covered much of Hubei province – an ancient landscape of forests, mountains and rivers including the UNESCO World Heritage Site of Shennongija primary forest.

Wuhan’s culture and development has long been associated with water.  It has been able to contain the flood waters of the Yangtze for thousands of years, by adopting a flexible approach to managing the challenges of flooding and drought.  The water elements of the design of the garden reflected this network of canals, rills, and seasonal ebb and flow of the Yangtze through tidal lakes.

The Wuhan International Eco-logistics Park masterplan was designed in partnership with Brookfield/Gazeley (now GLP). The design was for a multi-modal and multi-functional logistics park on an unprecedented scale. It would introduce a ground-breaking concept within China for an eco-logistics city powered by renewables. 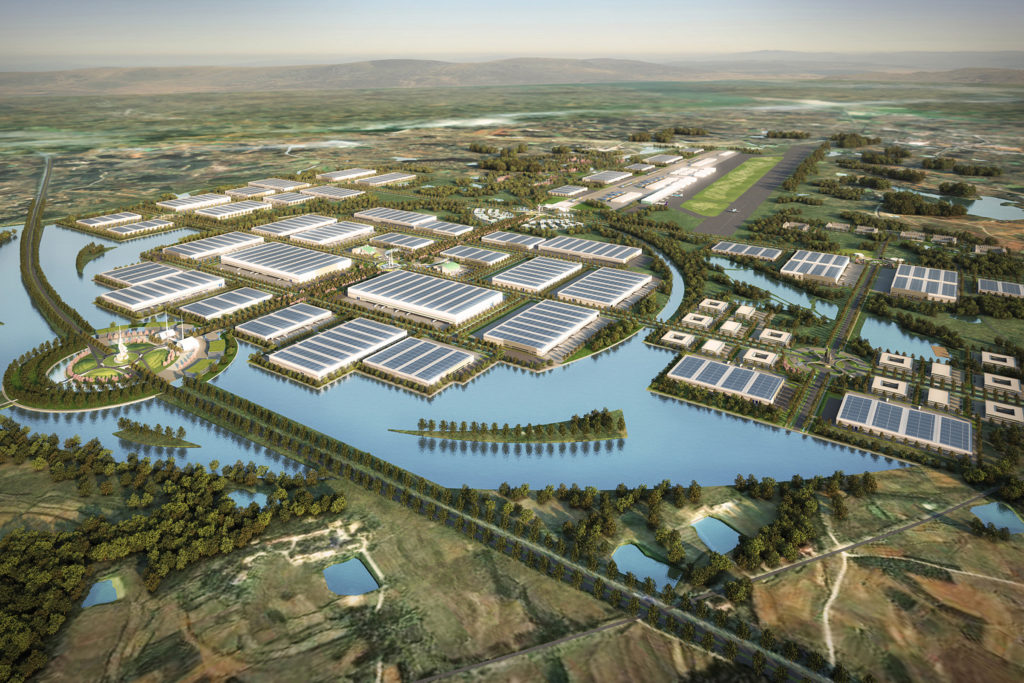 The masterplan was designed to reflect the 5000-year tradition of Chinese agriculture that humanity can have a mutually beneficial relationship with the biological world in ‘cradle-to-cradle’ rather than ‘cradle-to-grave’ agriculture. The layout was conceived on multi-levels with the new community and landscape growing over the logistics and infrastructure heart of the settlement.

When I was invited to design a conceptual masterplan for the Mount Lu Estate of World Architecture (MOLEWA) in Ruichang as a new tourist destination and world-class assembly of architecture, we conducted in depth research into the post-1990s history of China’s shift from rural to city-centred urbanisation reflecting its integration into the world’s economy. We explored how city governments became instrumental in promoting economic growth and social change with new special economic areas and development zones allowing creative and rapid architectural development of ‘Open Cities’. 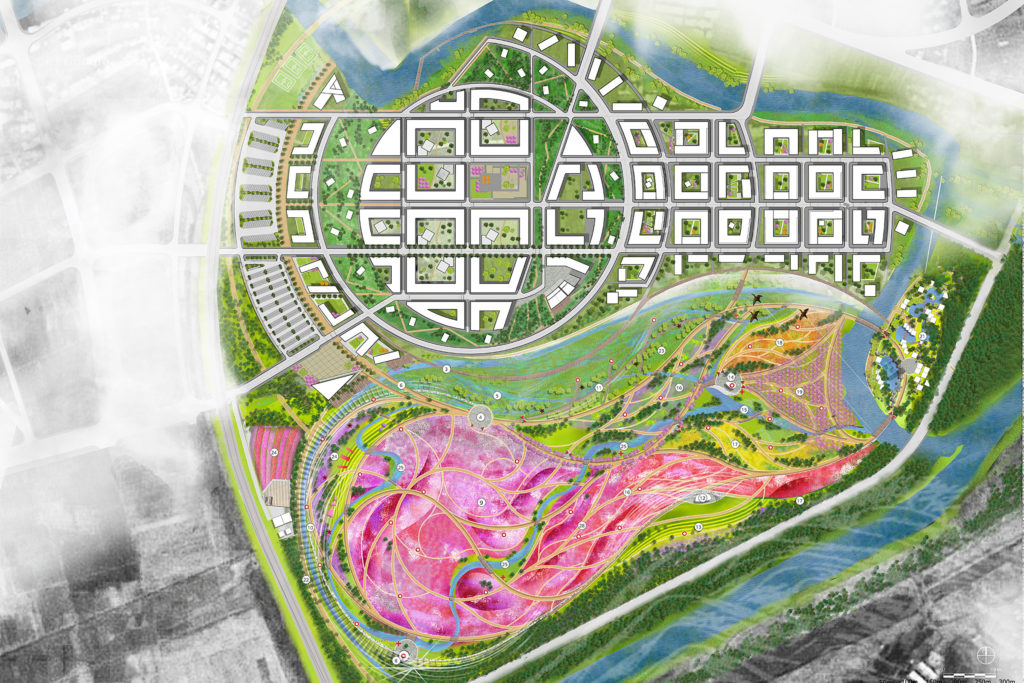 I drew on this history of buildings and towns in China to incorporate the symbolism of some of these typologies, layouts and ratios of space into the masterplan.

At over 20 hectares MOLEWA would form the heart of the Huayan Township, combining residential, commercial, hotel and cultural projects over 67 hectares. The wider scheme included a Flower Ocean which at more than 80 hectares would be one of the world’s largest flower-themed parks.

Mount Lu is one of the most celebrated tourist destinations in China, renowned both for its stunning scenery and its cultural heritage, attracting more than 10 million visitors annually. Flower Ocean would enhance the visitor experience in Ruichang where new transport links provide a new gateway into the region.

Health City Ruichang originated from an international competition in 2015 hosted by the International Union of Architects in Paris and sponsored by Huayan Group, a leading cultural investment company in China. 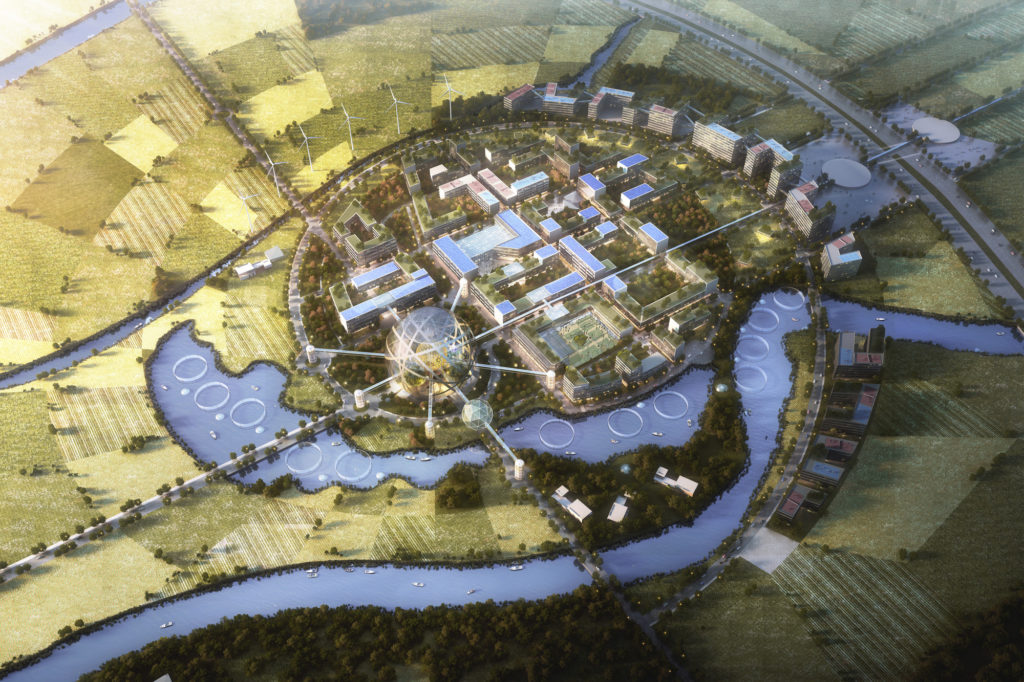 I developed a masterplan for a new city based on a multi-generational model that would deliver ‘Blue Zones’ benefits to urban communities on a site on the outskirts of Ruichang, in Jiangxi province, for which the Huayan Group had secured development rights.

As China’s urbanization speeds up, the demand to modernize 2nd or 3rd tier cities and towns is also rising. Health City has been dedicated to finding a smarter and greener solution to this demand.

The fundamental philosophy is for Health City Ruichang to be a wonderful place to live, a healthy place both physically and mentally, and one where inhabitants can live a long and happy life.

As the current pandemic evolved it became apparent that, as well as physical health, the mental health and welfare of populations were at serious risk, and the new city’s design has now been further adapted to include a transformative 10-storey biodome space to keep culture going safely as a pilot for remodelling tourism, recreation, sporting and cultural facilities into pandemic-proofed designs.

In plan, the architecture is based on contemporary interpretations of traditional Chinese Siheyuan and ‘Sky Well’ courtyards. The new buildings thus refer back to a tradition that is ideal for adapting into self-sufficient community isolation and shielding safely with roofs able to be closed over open spaces.

Outdoor spaces – both exposed and sheltered – and natural ventilation are maximised in the overall design concept.

Water is an important part of the landscaping strategy highlighting its therapeutic potential. The presence of water is also a reference to the ancient Chinese bathing rituals that predate those in the West and that can be experienced at Health City Ruichang’s state-of-the-art hydrotherapy pools.

I am currently working with my Studio team on a series of underground Metro Stations in Chengdu in collaboration with our partners in Shenzhen. 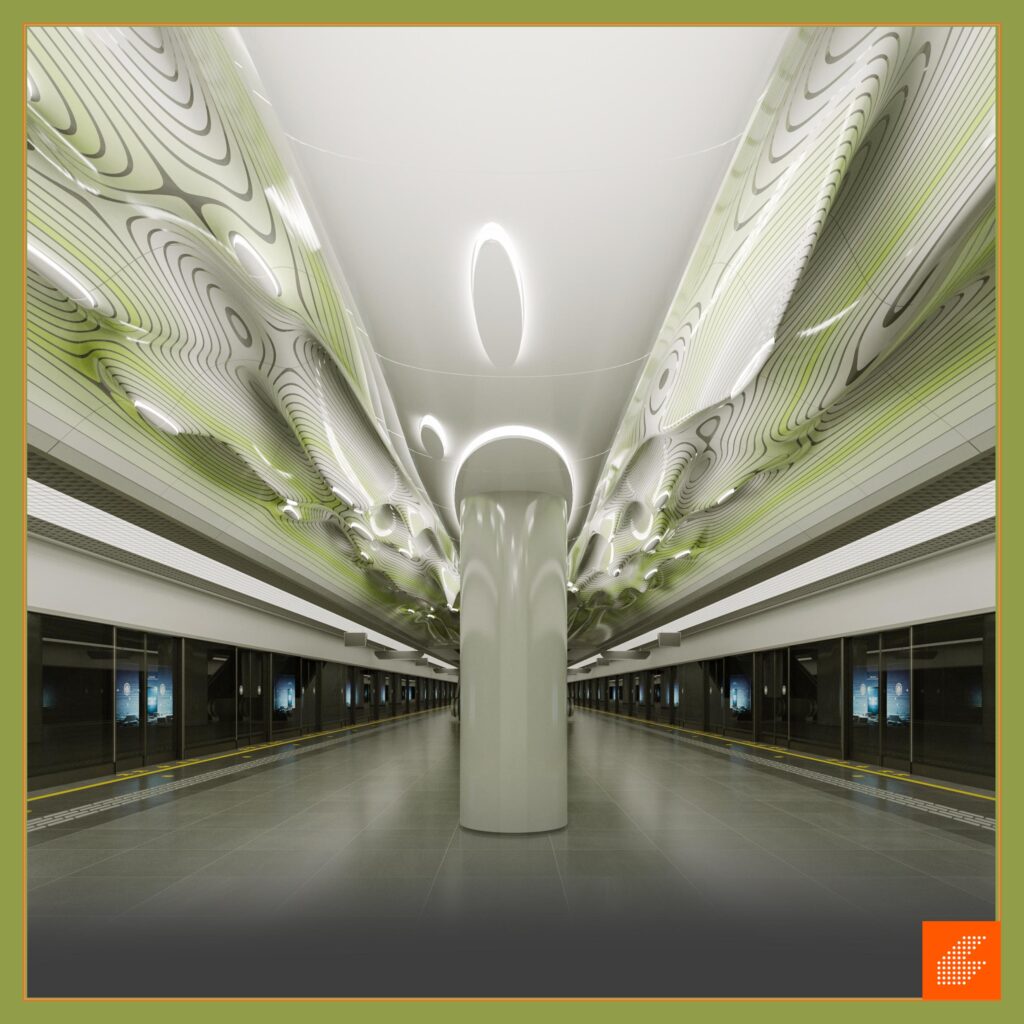 The stations are designed to be memorable spaces that `provoke emotions`, not merely points of transit. Each station has a unique concept that explores and interprets in its form, texture and materials the local culture of the area in which it is located.

This concept for the ceiling art in our competition entry for the interior design of the standard stations in Line 14 of Shenzhen Metro in China is based on ecology. It focuses on two key themes: Shenzhen as a ‘City of a Thousand Parks’ and Shenzhen as one of China’s pilot ‘Sponge Cities’.

The ecosystem of elements in nature is interpreted and applied within the urban context of Shenzhen as the mix of elements that will create a ‘sponge city’. The concept represents this symbiosis of green and built land, combined with other elements of nature that will contribute to the city’s ecology and ecosystems.

Rather than using an abstract map, we have used the map of parks in Shenzhen to visualize this ecosystem. All the elements of the ecology-based design start from the two sides of the station hall and come together at the centre of the space to form the representation of the city.

The choice of various design themes for different standard stations allows us to create a variety of cultural and artistic manifestations, while keeping the overall body of the design standardized and economical. This proposed design for the artistic design of another station on the same line is based on the history and culture of the Hakka people. 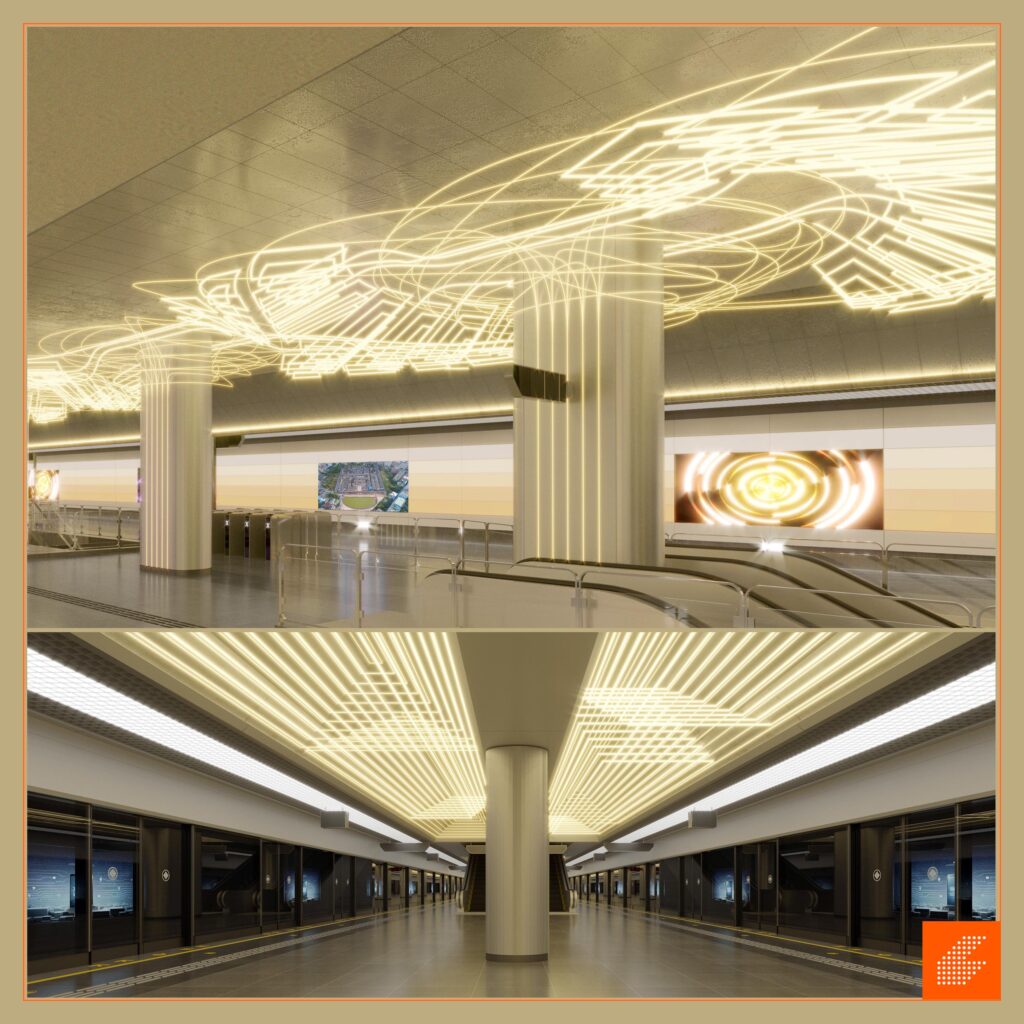 The square forms of Hakka houses – visualised by the use of neon lights – are clustered to create the traditional patterns of Hakka residential organisation. The clusters spread out into the wider environment in a visualisation of the trails of travel, movement and migration of the Hakka community through the rest of China and beyond to the wider world.

Chinese Influence in my Art Works

Chinese culture and history also inspire many of my art works.

This work – Xiaowan Bay – Green City was exhibited at the Royal Academy of Arts in London.  It represents a conceptual masterplan for a new green city on the coast of the South China Sea – a ‘Blue Zone’ coastal settlement, designed to combine seascape, beachscape, streetscape and landscape into a holistic community, where people can flourish at work, rest and play; a place in which every element contributes to the health and wellbeing of its residents. 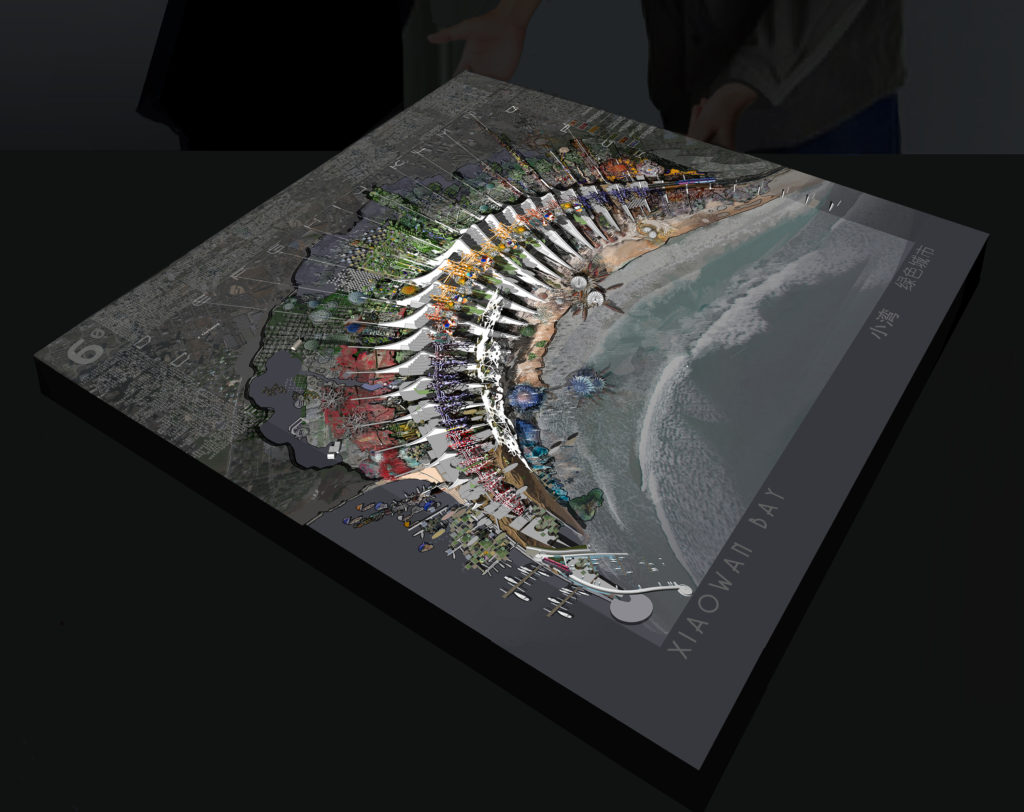 A curved spinal wave form embraces and protects the community, while creating connections through it between land, beach and sea; cultivated, agricultural and natural landscapes; and working, living and recreational zones.

This work, selected by the Royal Academy, is based on the historic Forbidden City in Beijing and explores the relationship between public and private spaces. 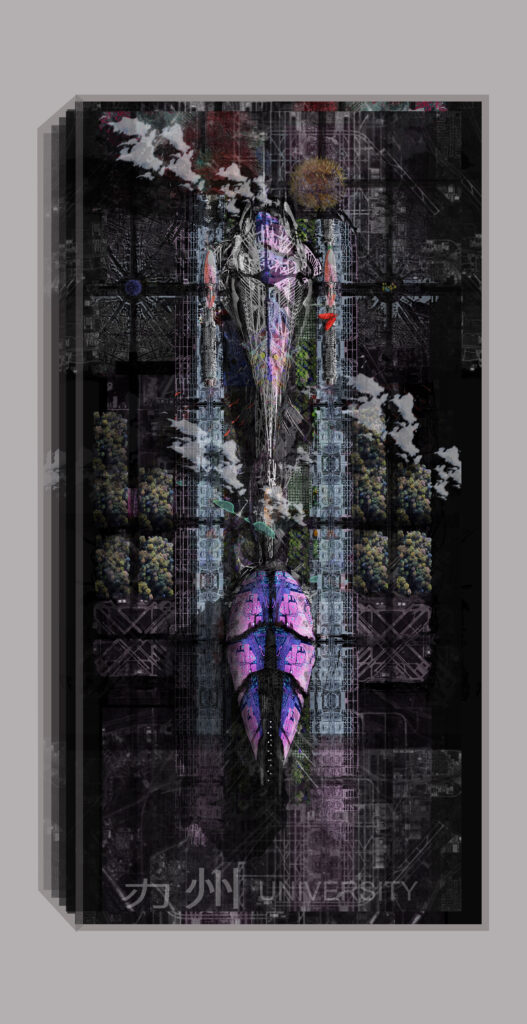