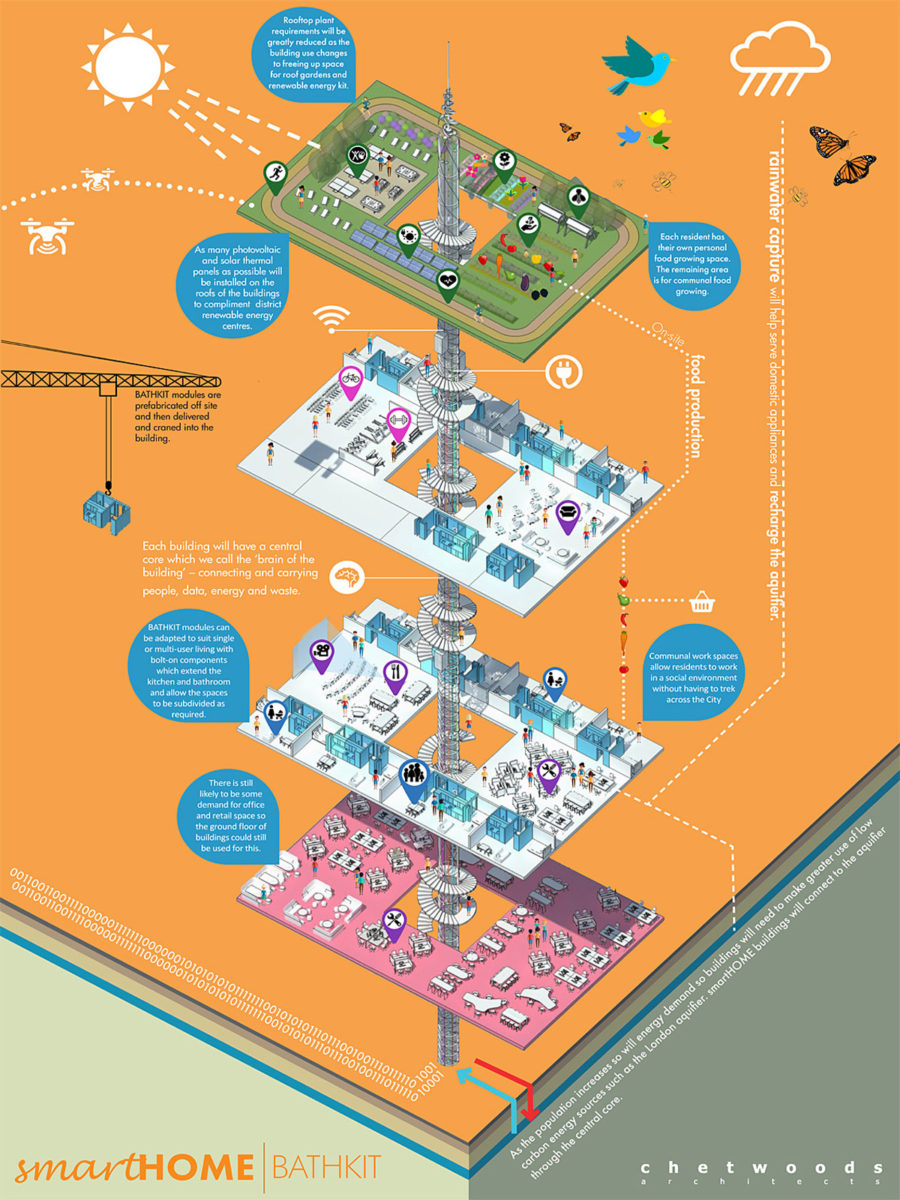 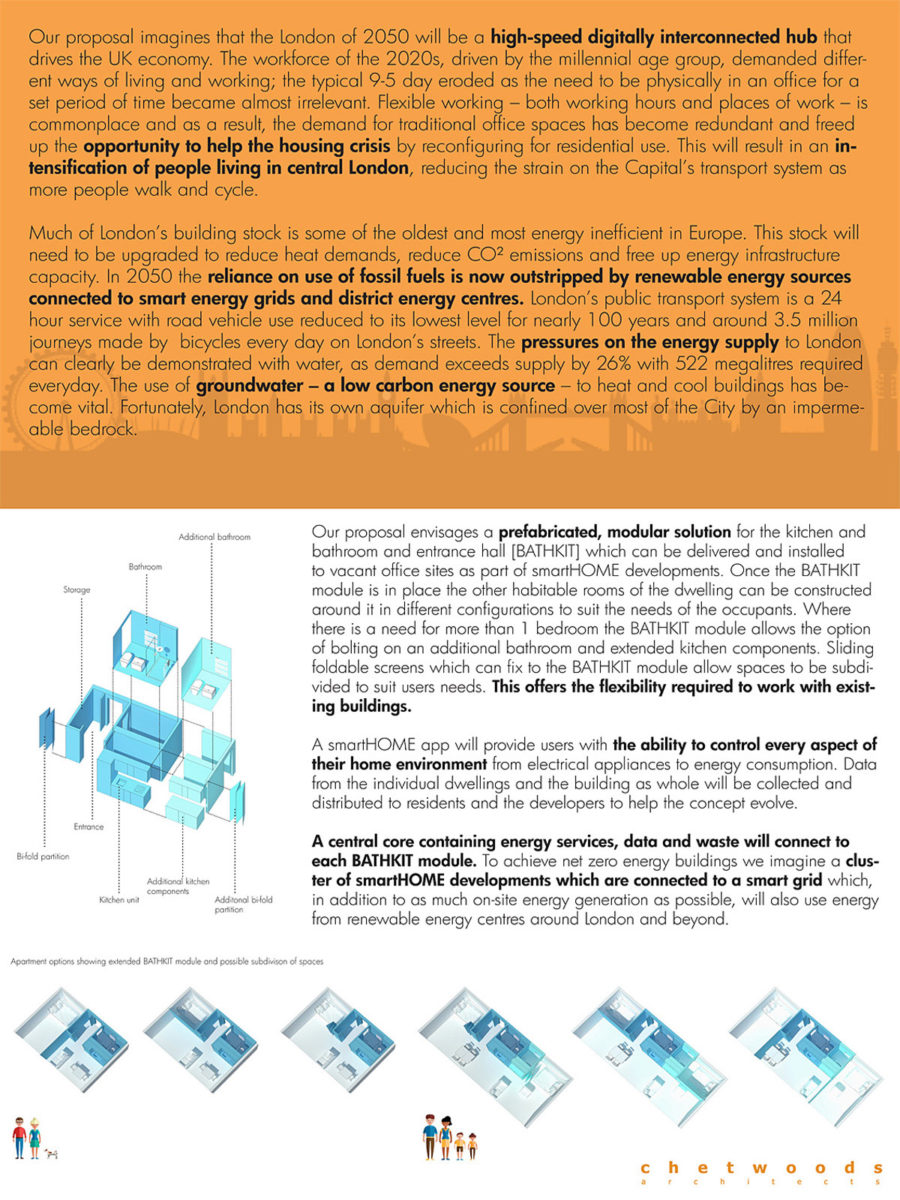 We were thrilled to be announced as one of 3 winners in the XCO2 Green Sky Thinking 2017 design competition.

The competition asked architects and designers to look to the future, the year 2050 to be exact, and come up with innovative and inventive ways to tackle the capitals growing Housing Crisis. With space for new housing at an all-time low, reusing the city’s existing non-domestic stock has become an imperative.

Our proposal imagines that the London of 2050 will be a high-speed digitally interconnected hub that drives the UK economy. The workforce of the 2020s, driven by the millennial age group, demanded different ways of living and working; the typical 9-5 day eroded as the need to be physically in an office for a set period of time became almost irrelevant. Flexible working – both working hours and places of work – is commonplace and as a result, the demand for traditional office spaces has become redundant and freed up the opportunity to help the housing crisis by reconfiguring for residential use. This will result in an intensification of people living in central London, reducing the strain on the Capital’s transport system as more people walk and cycle.

Much of London’s building stock is some of the oldest and most energy inefficient in Europe. This stock will need to be upgraded to reduce heat demands, reduce CO² emissions and free up energy infrastructure capacity. In 2050 the reliance on use of fossil fuels is now outstripped by renewable energy sources connected to smart energy grids and district energy centres. London’s public transport system is a 24 hour service with road vehicle use reduced to its lowest level for nearly 100 years and around 3.5 million journeys made by bicycles every day on London’s streets. The pressures on the energy supply to London can clearly be demonstrated with water, as demand exceeds supply by 26% with 522 mega litres required every day. The use of groundwater – a low carbon energy source – to heat and cool buildings has become vital. Fortunately, London has its own aquifer which is confined over most of the City by an impermeable bedrock.

“Much of London’s building stock is some of the oldest and most energy inefficient in Europe.”

Our proposal envisages a prefabricated, modular solution for the kitchen and bathroom and entrance hall [BATHKIT] which can be delivered and installed to vacant office sites as part of smartHOME developments. Once the BATHKIT module is in place the other habitable rooms of the dwelling can be constructed around it in different configurations to suit the needs of the occupants. Where there is a need for more than 1 bedroom the BATHKIT module allows the option of bolting on an additional bathroom and extended kitchen components. Sliding foldable screens which can fix to the BATHKIT module allow spaces to be subdivided to suit users’ needs. This offers the flexibility required to work with existing buildings.

A smartHOME app will provide users with the ability to control every aspect of their home environment from electrical appliances to energy consumption. Data from the individual dwellings and the building as whole will be collected and distributed to residents and the developers to help the concept evolve.

A central core containing energy services, data and waste will connect to each BATHKIT module. To achieve net zero energy buildings we imagine a cluster of smartHOME developments which are connected to a smart grid which, in addition to as much on-site energy generation as possible, will also use energy from renewable energy centres around London and beyond.

For full details on all 3 winning entries click here. 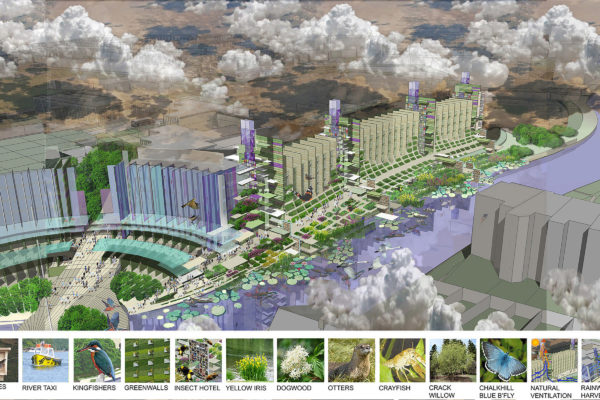 Chetwoods developed a masterplan for the South Bank of the River Avon as part of Bath Western Riverside re-development, creating... 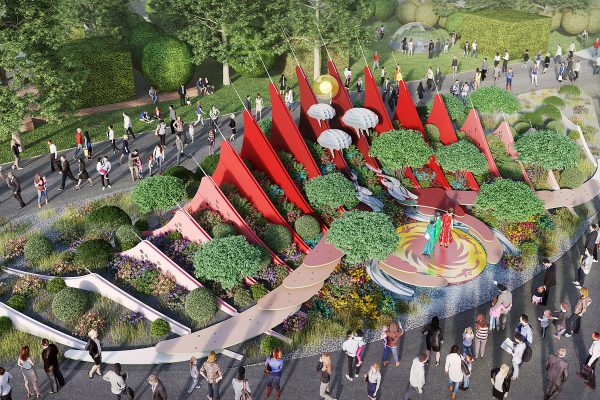 Laurie Chetwood collaborated with landscape architect Patrick Collins to design a fourth Show Garden for the Triangle Site at the... 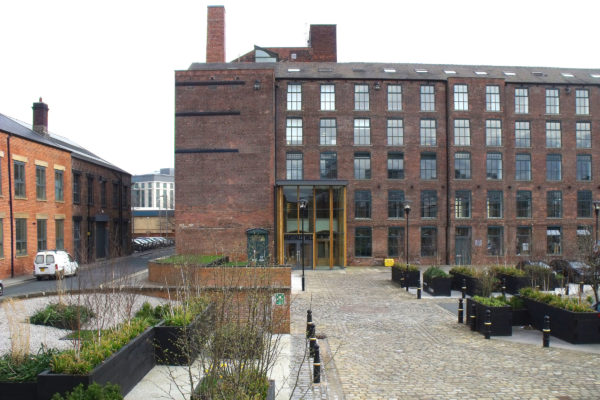 Chetwoods major refurbishment of this Grade II* Listed former flax mill revealed the historic fabric of the Mill whilst creating...