The Origins of Multi-Storey Industrial Warehousing 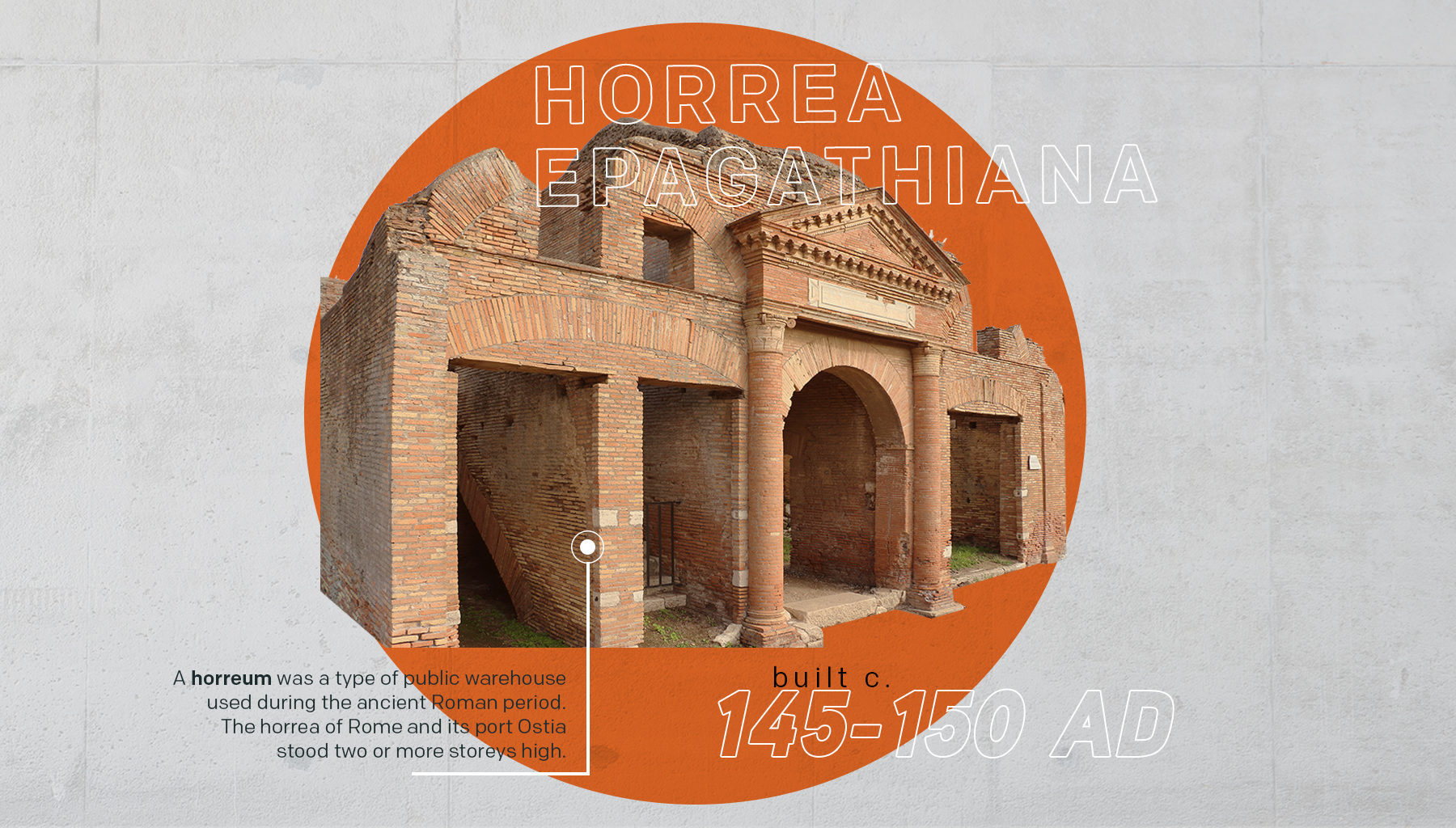 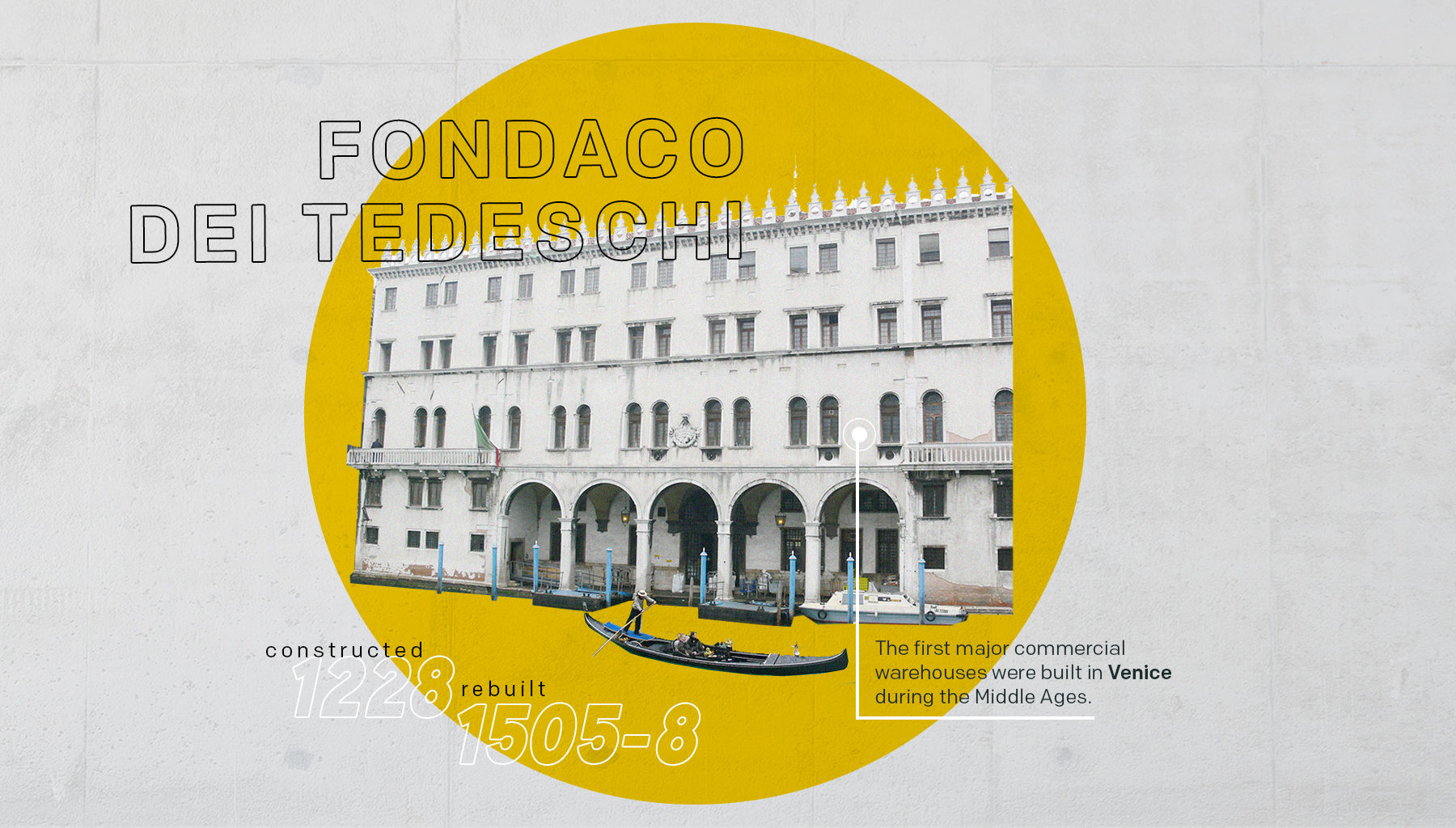 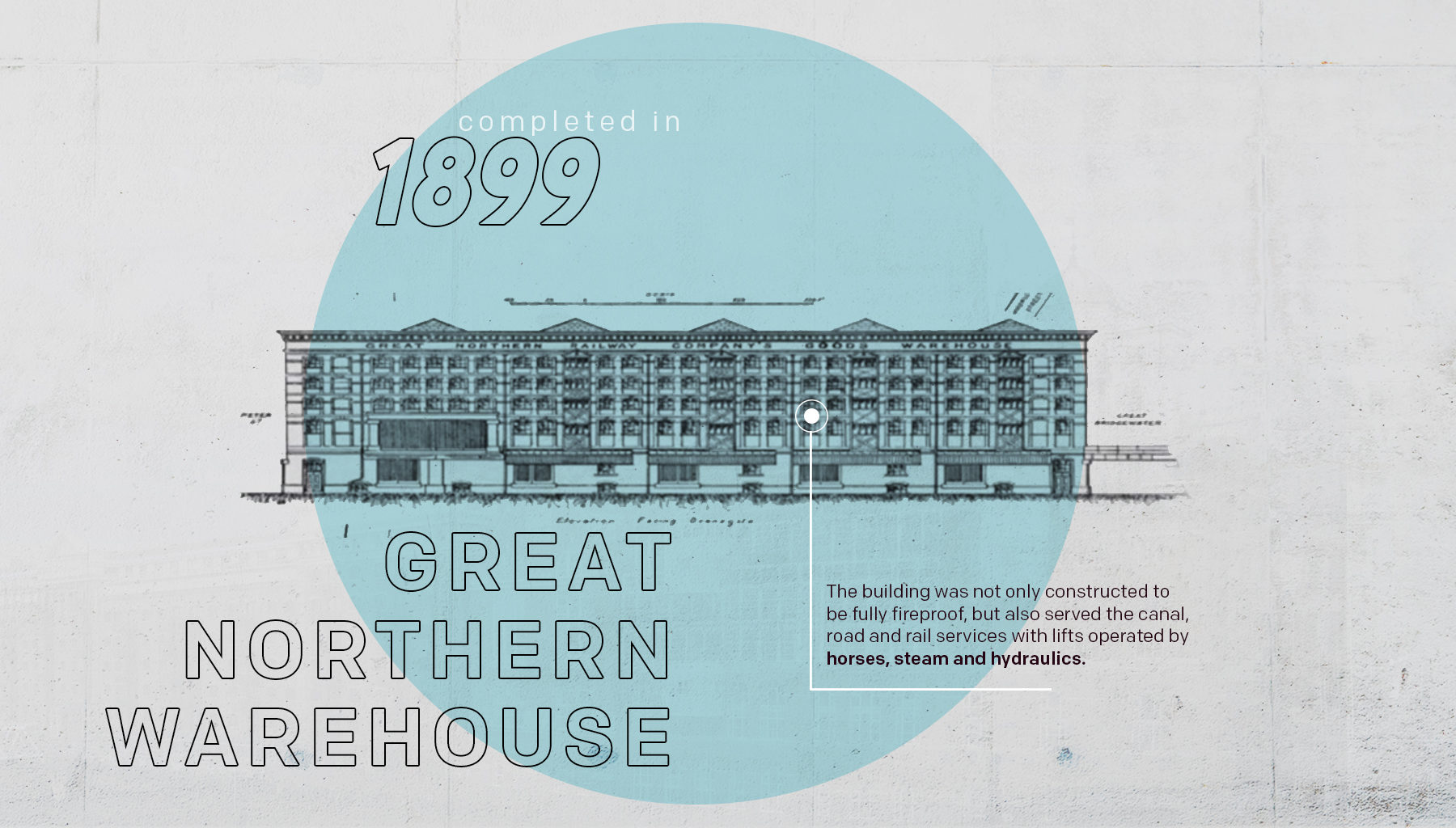 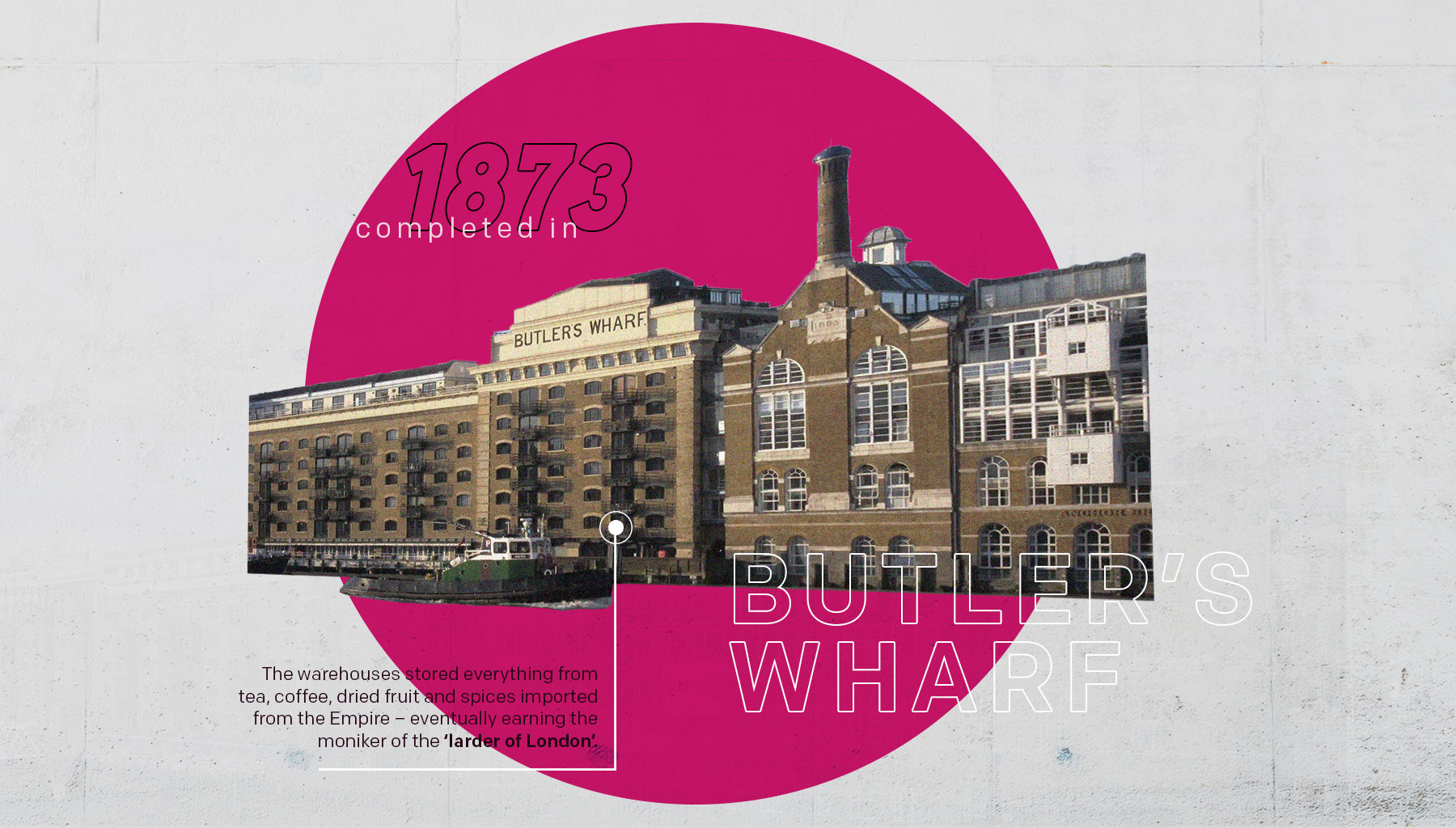 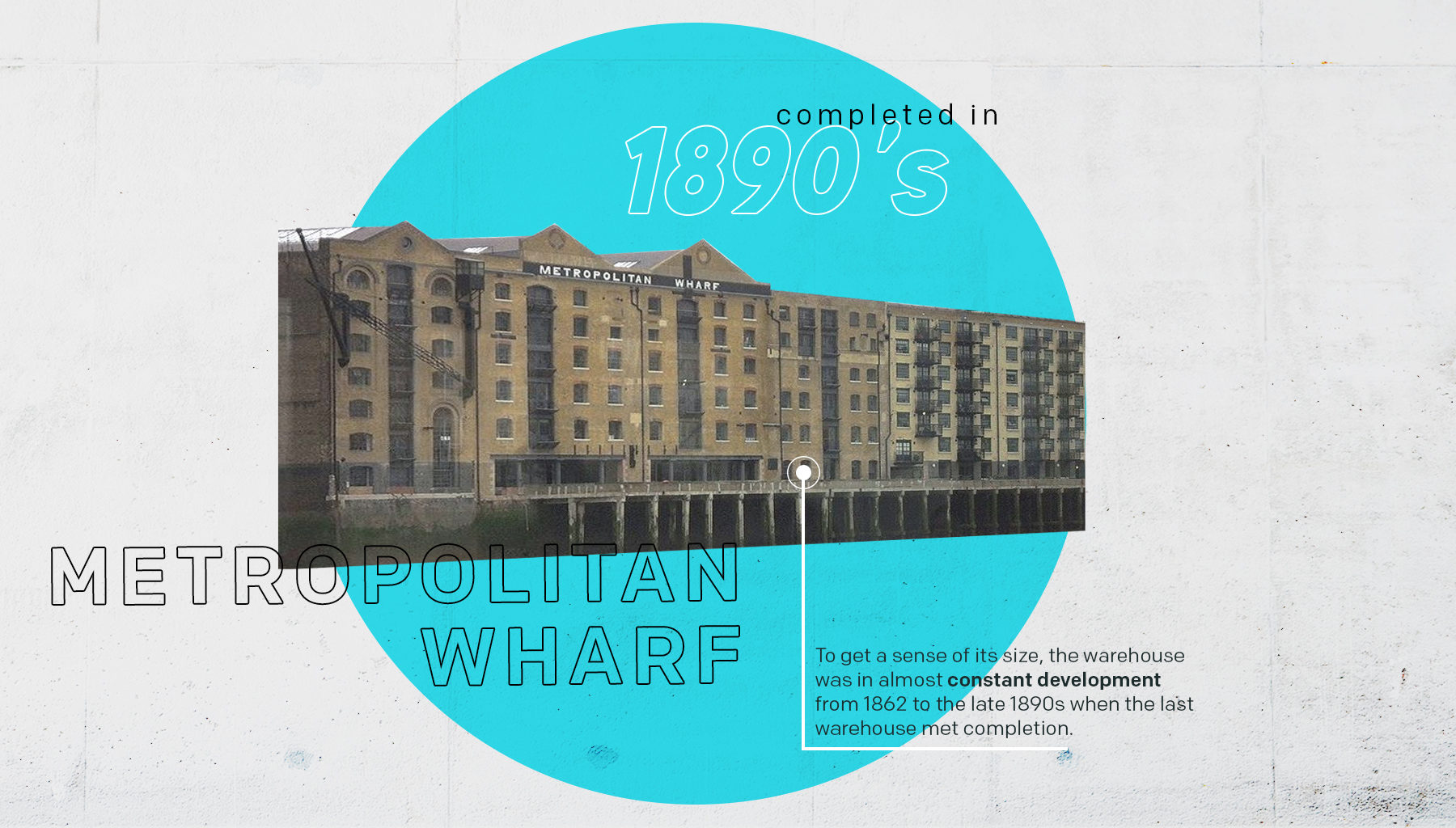 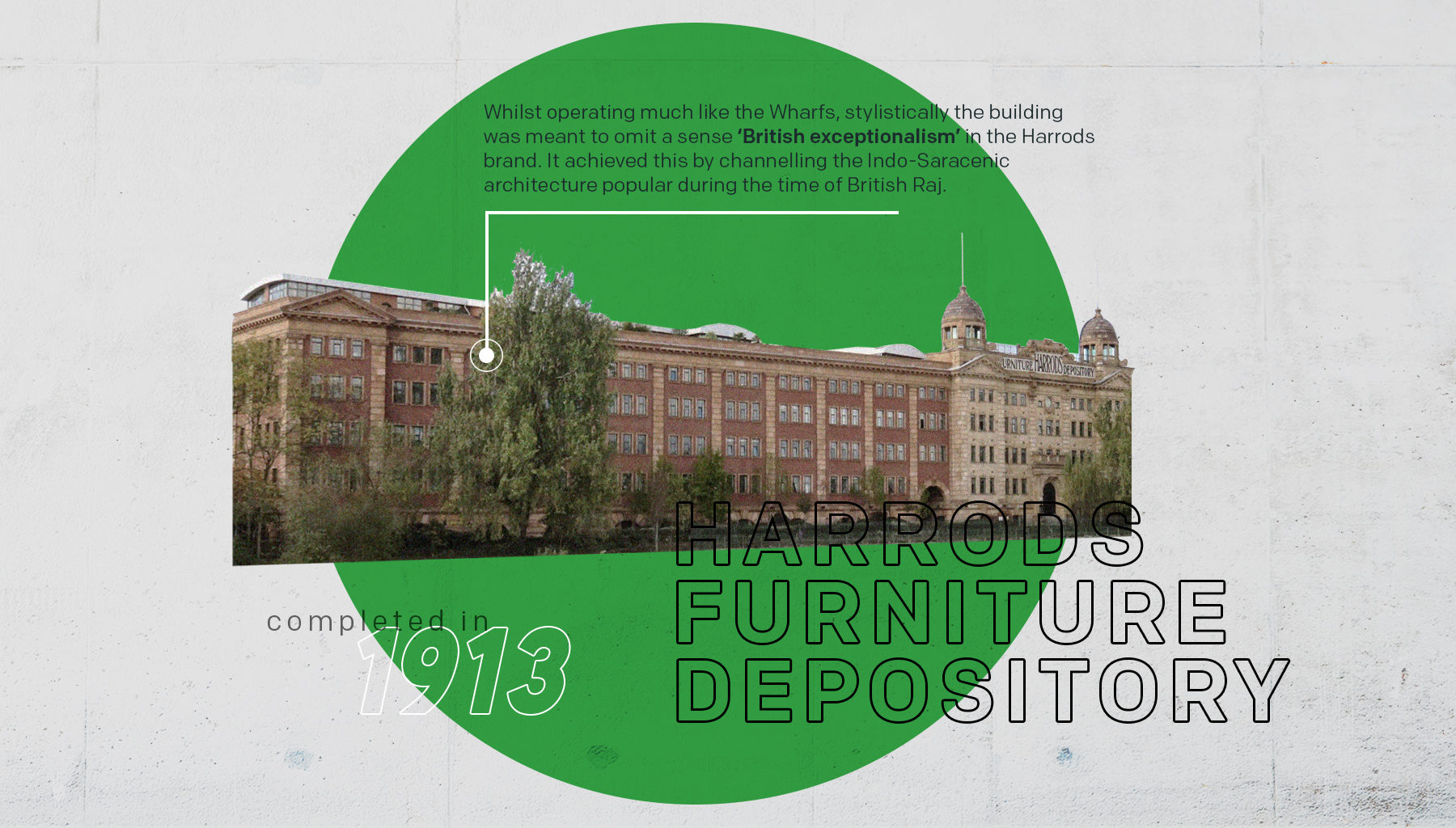 With our current work on state of the art multi-storey urban logistics projects,we thought it would be interesting to look back at the development of this type of industrial warehousing.  In this first of a series of articles we start with a look at their history.

Sometimes referred to as ‘transportation at zero miles per hour’, the modern-day warehouse serves four main functions; to receive, store, pick and ship goods. They are an essential cog in the wheel of both national and international trade, without which we could not achieve the globalised markets and sprawling logistical systems that we enjoy today.

Alhough we may have reached a stage of technological advancement previously unheard of, demand for products cannot be predicted with certainty and they cannot be supplied immediately; so warehouses, providing a buffer zone between supply and demand, are here to stay.

Warehouses started with humble origins. In early writings, humans are described as having stored excess foods and animals for surplus in times of emergency. Over time, these developed into granaries and storehouses which were soon used for financial purposes – in fact, historian James Tompkins attests that “warehousing for the purpose of commercial gain is at least as old as recorded history”. 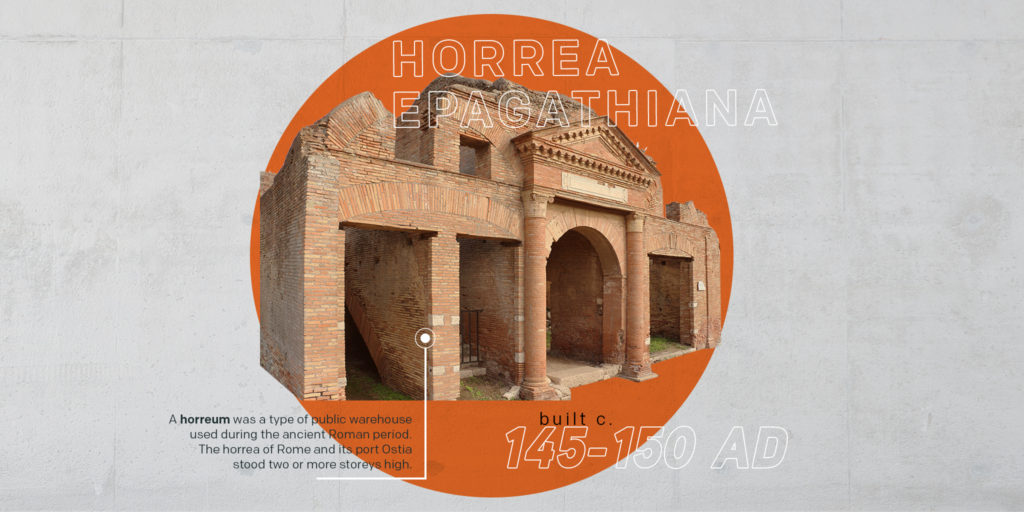 As time passed and trade became international, the warehouse truly came into its own. The first major commercial warehouse is widely agreed to have been built in Venice during the Middle Ages, which at the time was a major centre of trade routes the world over. As trading began to expand beyond the Mediterranean, each port city developed its own terminal warehouse, close to the city centre markets. 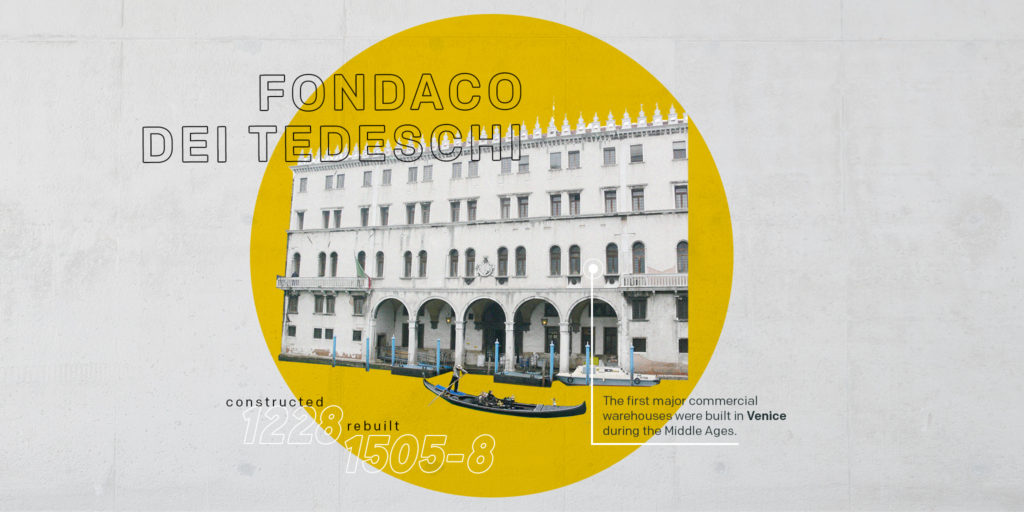 With the advent of the Industrial Revolution, warehouses became bigger in size, bolder in design and… largely clad in thick smog. Though the pungent, dense black air of London was something future generations made an earnest effort to reverse, the innovations in warehouse development from this time conversely paved the way for the future.

The progressive warehouses of the Victorian era retain a sense of iconography in Britain’s industrial past, with many of them still standing – albeit in a more contemporary capacity – to this day. 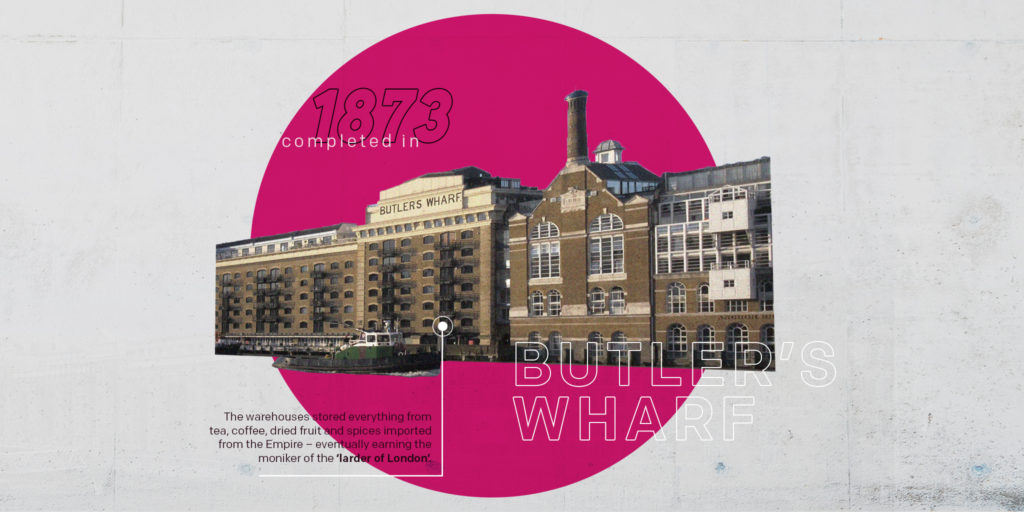 Butler’s Wharf, completed in 1873 and overlooking St. Katherine Docks, was for the time unprecedented in size. Being home to the largest warehouse complex not only on the Thames, but also in London, the complex stood at six (later seven) storeys tall. The sprawling network of warehouses stored everything from tea, coffee, dried fruit and spices imported from the Empire – eventually earning the moniker of the ‘larder of London’.

Part of the Port of London complex, the wharves and warehouses were linked by overhead goods gantries which enabled quick mobility between each store and increased transportation efficiency. Though the final warehouse shut its doors in 1972, the area began a process of redevelopment a decade later, where the sprawling gantries still stand to this day – proof of its enduring design and clever implementation. 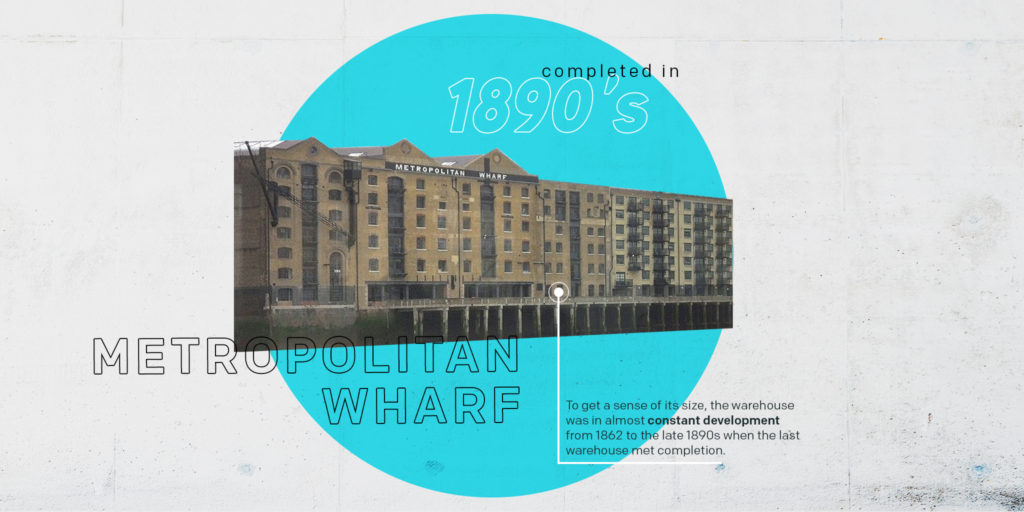 In Wapping, London, Metropolitan Wharf, grade II listed and much like Butler’s Wharf, was a substantial landmark in the warehouse landscape of 19th century London. Standing eight storeys high and containing five warehouses within the complex, the wharf still sits among the most impressive along Wapping Wall. To get a sense of its size, the warehouse was in almost constant development from 1862 to the late 1890s when the last warehouse was completed.

By the 1960s, however, new methods of handling cargo moved into popular use along with the use of much larger ships. Subsequently, industry began to leave places like St. Katherine’s Dock and Wapping Wall and relocated to the new ports at Tilbury, Felixstowe and Harwich. The wharves survive, largely structurally unchanged, re-developed as luxury apartments and commercial office space.

Both Butler’s Wharf and Metropolitan Wharf were emblematic of warehouse progression during the 19th century, especially architecturally. Cast iron columns began to replace timber posts and masonry piers to carry levels above the ground floor. Steel grinders replaced timber beams, increasing the span of internal bays in the warehouses, all paving the way for skyscrapers to come.

The introduction of the saw-tooth roof transformed the shape of the warehouse, with its implementation enabling the glazed, steeper surfaces of the window to face away from the south to shield workers and machinery from direct sunlight, though still allowing for natural light to enter.

The wharves and warehouses along this small pocket of the Thames – which amalgamated into the London Docks in 1864 – were the closest docks to the City of London itself and were built with such grandiosity and architectural strength that the intent was to use them for many years to come.

However, the shipping industry was to be the catalyst which brought about the untimely demise of the London Docks. Widespread adoption of the newly invented container system of cargo transportation, introduced in the 1960s, meant that vessels drastically increased in size. Subsequently, warehouses in this increasingly ageing part of Central London could no longer accommodate these new requirements, leading to the relocation of ports.

It was easy to view the legacy of the abandoned warehouses and wharves in the early 1980s simply as eight square miles of derelict land, however the Docks had an undeniable effect on both the community and housing of the area during its peak.

The London Docks became heavily intensified during the 19th century with over two thousand houses and businesses, including Shadwell Waterworks, being replaced by the new dock complex, whilst over ten thousand residents – mostly port workers – were displaced into slum living. With the extent of development extending to at least twenty-three acres, the warehouses and wharves of the London Dock certainly left their mark. 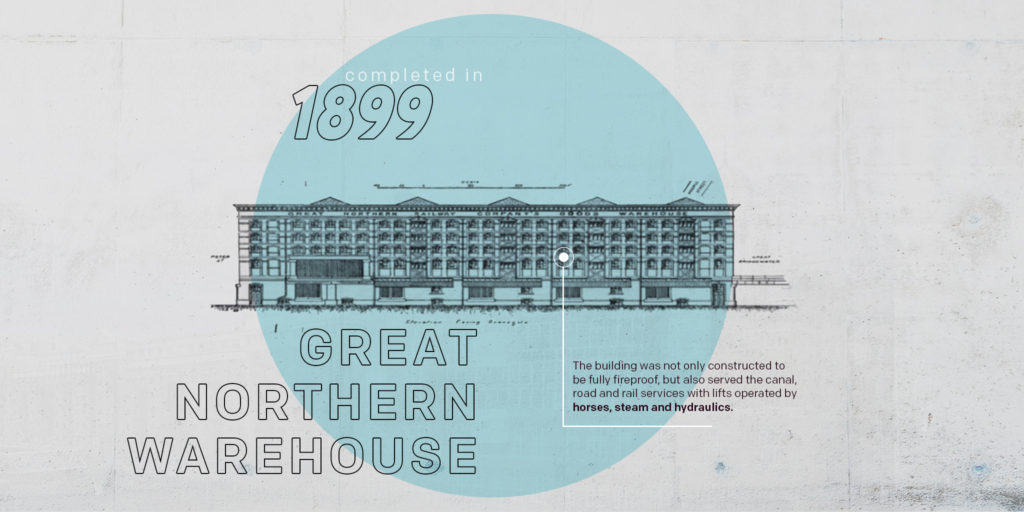 It was also a time of innovation. Further north, in Manchester, one of the best examples of progressive warehousing still towers over the city. Built upon the Manchester and Salford Canal, the building was not only constructed to be fully fireproof, but also served the canal, road and rail services all in one terminal.

Goods would arrive simultaneously from the canal, 40ft below the surface, whilst trains arrived directly from the pre-existing route to Central Station, on a specially constructed iron viaduct. Goods were then raised and lowered between the five storeys via two lift shafts, using a combination of horses, steam and hydraulic power. 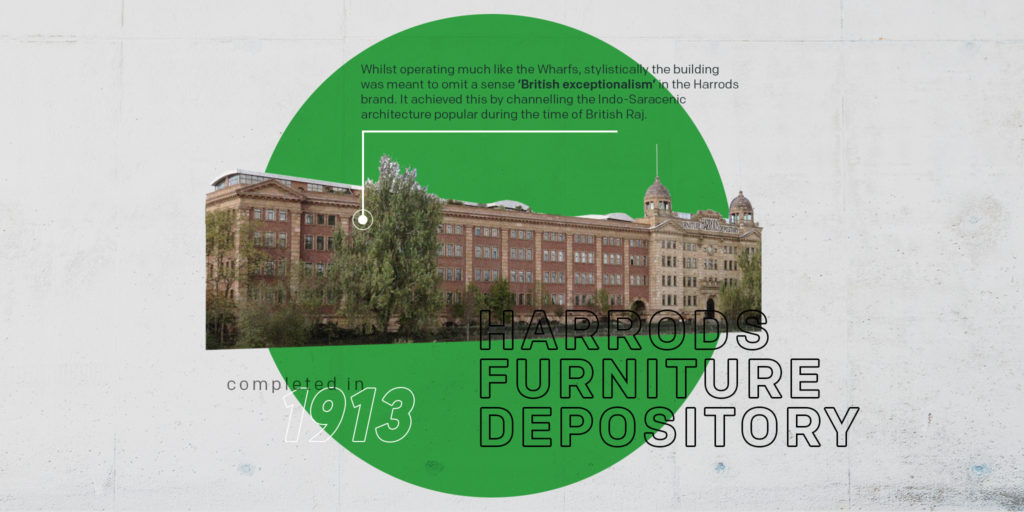 Back in London, further west along the Thames, stood the Harrods Furniture Depository – another grand product of the time. Building began in the early 1890s until completion in 1913 and though it operated much like the Wharves, stylistically the building was meant to omit a sense of ‘British exceptionalism’ in the Harrods brand. It achieved this by channelling the Indo-Saracenic architecture popular during the time of British Raj, as can be seen in the dome pillars which sandwich the building’s Thames-facing canopy sign.

The space was designed to store large items of furniture (as its name suggests) which due to their size were unable to fit in the storerooms of the main Knightsbridge store. Items would wait in the depository until they were needed for the showroom or ready to be sent directly to clients. The building boasted breakthrough technology such as lifts and reinforced concrete, whilst doubling as a storeroom for wealthy, private customers who used the depository to store goods whilst away from home.

London, at the height of the Industrial Revolution, played a pivotal role in the development of warehousing. Whether it be the connecting goods gantries of Butler’s Wharf, the lifts of Harrods Furniture Depository or the ground-breaking saw-tooth roof used city wide, London had to adapt its warehouses to both the technology and logistical development of the time.

Ultimately it was technology that would  undermine the London Docks, but the strong, iconic landscape of the Thames architecture stands strong to this day.

In our next article we will be looking at the technological changes that have driven change in multi-storey warehouse design. 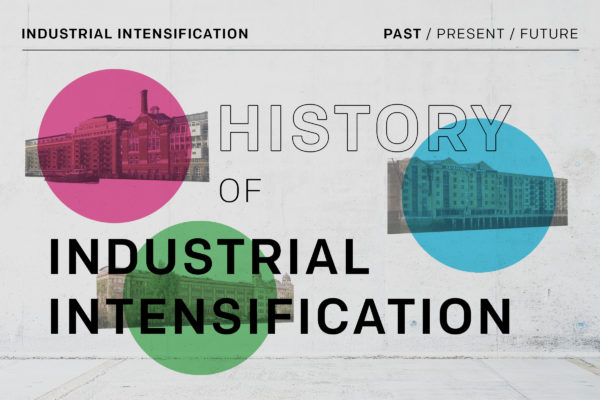 We have been active in the industrial and logistics sector for over 30 years. We  are industry leaders in design... 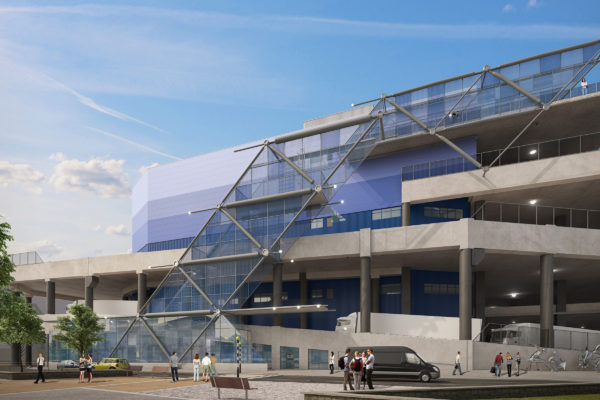 Chetwoods have been appointed by GLP, to develop G Park London Docklands, the UK’s first three-storey logistics facility. The warehouse... 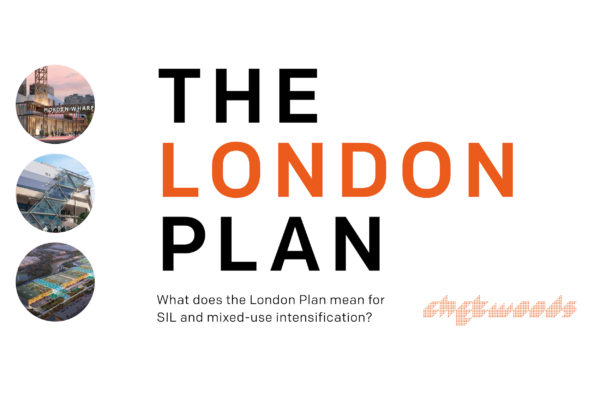 Following the publication of the Mayor of London Sadiq Kahn’s New London Plan, and our own recent focus article on...